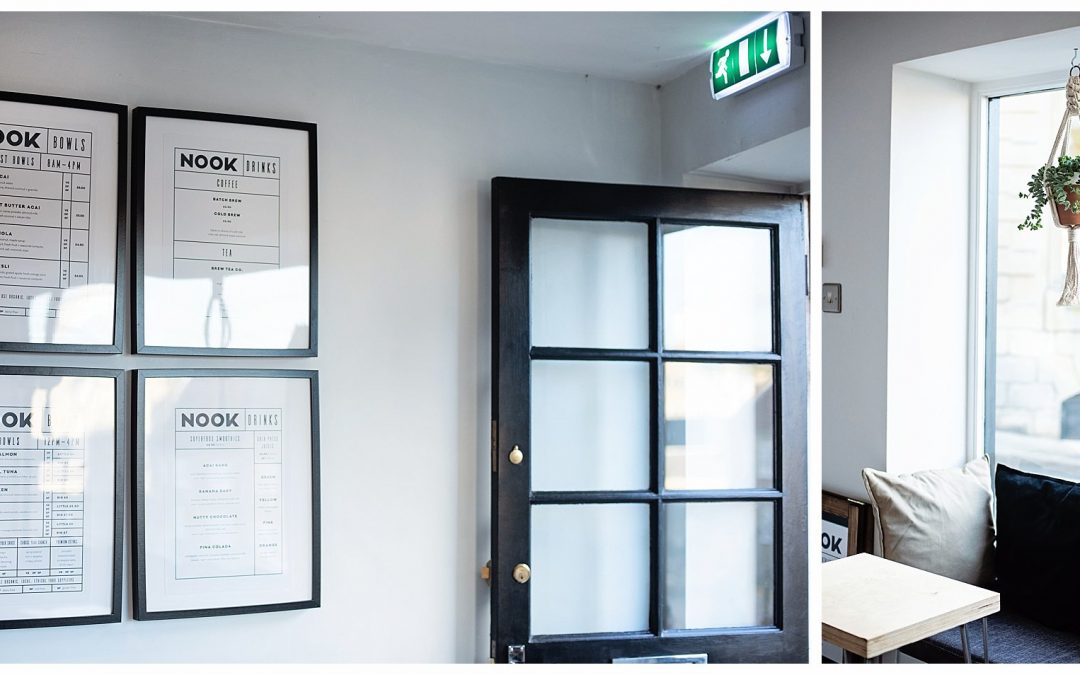 Nook is an Australian influenced juice and bowl bar selling cold press juices, pokē, smoothies, and broth bowls with a  Japanese, Hawaiian and California twist. Recently opened in Frome, Somerset tucked away in a “nook” on King Street, I for one was very excited to get myself down to Nook to try out their menu. I was missing my pokē bowls. 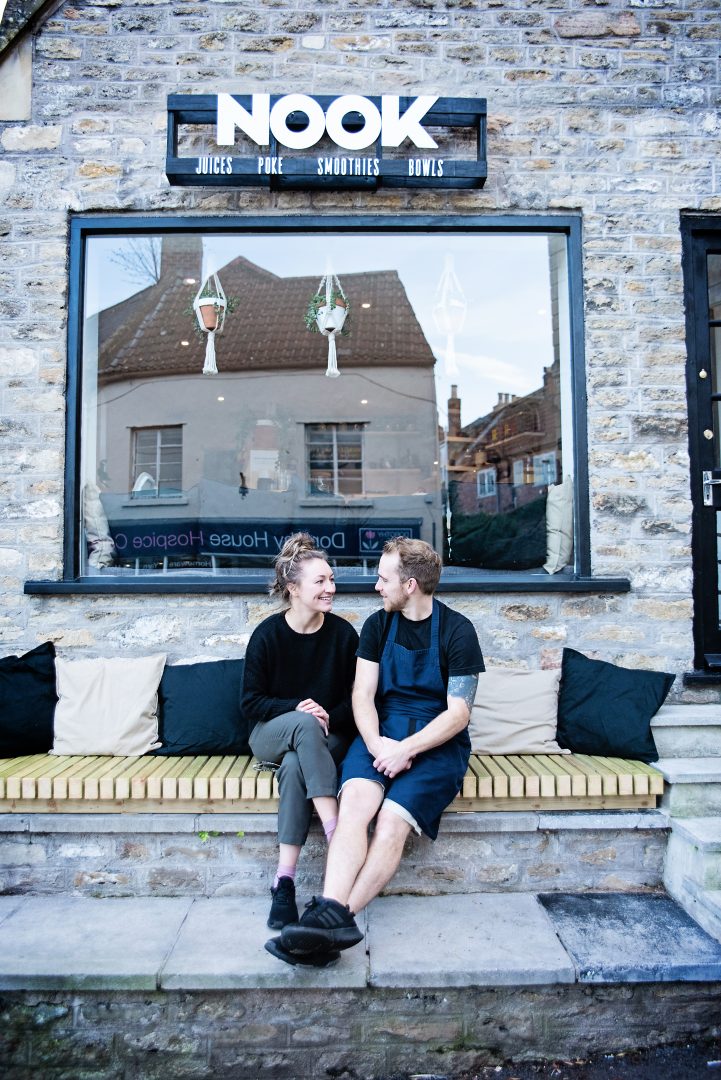 As you walk down King Street , you will soon be greeted by Nook’s outside bench seating piled with cushions. Nook really does live up to its name. A couple of tables and bar seating is all that can be squeezed into The Nook, but don’t worry as Millie and Jake do take outs and delivery within a 10 minute walk of the shop.

I love the simple modern menu’s framed on the wall. Everything on the menu is made to order which I love as well.

I have tried making smoothie bowls on numerous occasions at home with no luck. So i am so happy I can grab a smoothie bowl in Frome now. This is Nook’s original Acai bowl. The smoothie is banana, acai and blackberries topped with bananas shaved toasted coconut and nuts finished off with a delicate edible flower. Packed with flavour and goodness,  just what I need to start the day with. 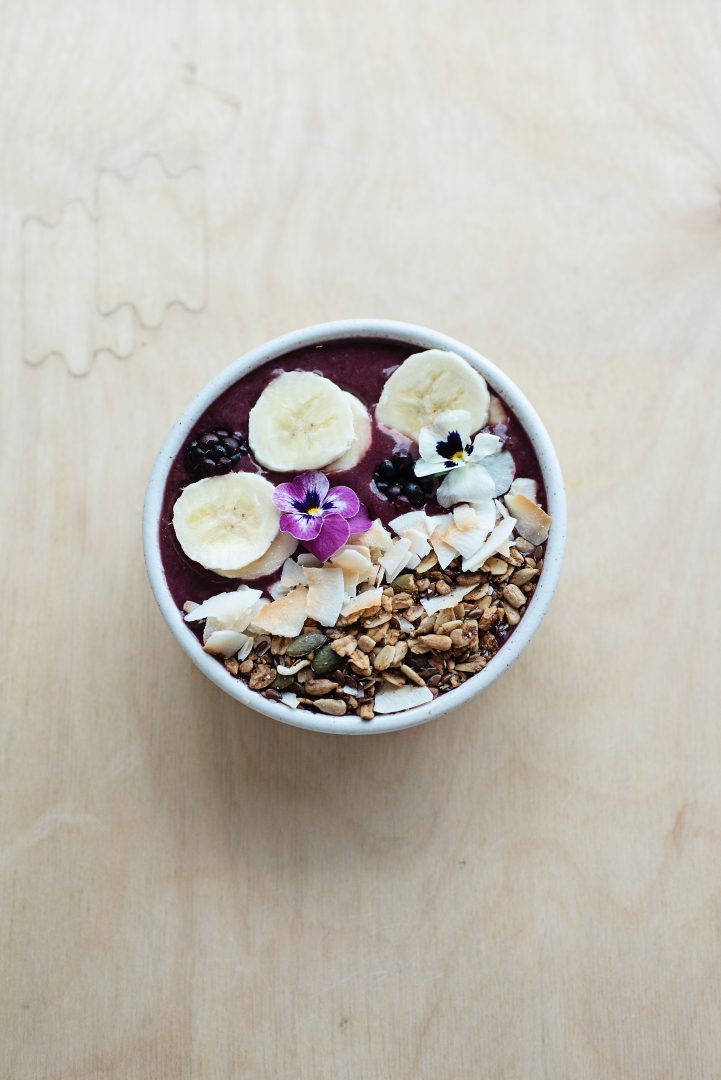 The pokē bowls come with your base choice, protein choice and then your dressing, crunch and topping choice! I am partial to the tofu bowls, with noodles, sesame and tahini. No two bowls are the same .

Now winter is here Jake has added daily broth bowls to the menu. Hearty miso soup topped with veggies is my go to broth bowl

And if you just fancy a juice, maybe a coffee and something sweet, you will not be disappointed by Millie’s daily vegan bakes, including brownies, coconut and lime cake, and protein balls to name a few of her baked delights. 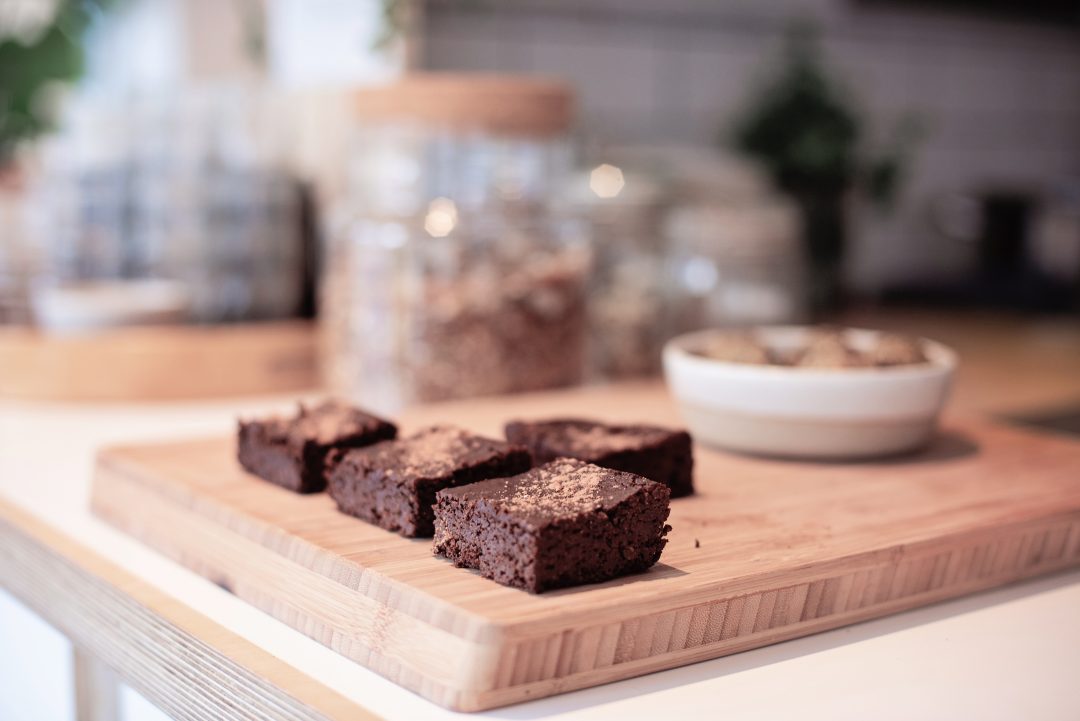 I was born in Bath and moved to Australia as a toddler. I grew up on the sunny beaches on the Gold Coast in Queensland and moved back to Frome at 19. Ive worked in hospitality for 12 years in hotels, restaurants, cafes and bars both here and in Australia.

Jake was born in Salisbury, but grew up near Shaftesbury in a village called West Knoyle. He began his career in Food with Baking but not soon after got into cheffing when he went to work At the Chapel, Bruton.

It was quite organic. We both knew we were becoming dissatisfied working for other people and wanted to take the leap into working for ourselves, but we were not sure which route to go down. Not soon after we found ourselves sitting on a beach in Byron Bay eating poke bowls and drinking cold press juice and we thought this would go down well in Frome. Fast forward 9 months and we opened our little shop NOOK.

Frome is a haven for independent businesses and has an assortment of wonderful eateries with varied styles of food and drinks. We identified a gap in the market for a business that could sell cold press juice, , proper smoothies and selection of food for veggies, vegans and gluten free diets. We also felt that a Japanese style cuisine would go down an absolute treat with the foodies of Frome as there was nothing like that in the town.

We are an Australian influenced juice + bowl bar with further influences from Hawaii, Japan and California. We specialise in healthy, tasty and colourful food and drink products that are complex in flavour but straightforward with health benefits.

Inspired by a trip to Australia we identified products that were hugely popular and successful in Australia. Food and drink that we wanted to eat and drink here but only found in the big cities. So we thought, lets do it!

Between the two of us we have 20 years experience working in the hospitality industry at a variety of different venues and for different employers. This has been a learning experience in both what to do and what not do in running a business so we have applied our experience and knowledge to open our own business.

All of our packaging is made from plants and is 100% compostable and biodegradable. For our produce we buy organic, local and seasonal items where possible. We recycle all of our glass, card and plastics from our produce packaging and we try to encourage our deliveries to take the boxes and reuse. We also encourage our customers to bring their own containers and cups to use in place of plant plastics and ask them to bring back the plant plastics for us to reuse for them if possible.

In the next year we plan to do NOOK pop up’s and markets in both Frome and surrounding towns. We also plan to buy a food truck in a years time and have poke bowls on the go! in 5 years time we hope to be running another two NOOK shops in other towns similar to Frome.

Neither Jake nor I follow one specific diet. Our emphasis is to eat as clean, colourful and as plant based as possible without cutting out anything in its entirety.  We did make a conscious decision to be 100% GF as we know so many people who are GF and Celiac who struggle to eat out and have much less choice when eating out. Most of our products were GF to begin with so it only took a few changes in order to have menu that is 100% GF.

As time goes on it becomes more evident that plant based eating is the future. We did not want to be 100% vegan as we did not want to deter people that are not vegan from experiencing our food. Equally we wanted to be a high percentage around 80% of vegan food so that the growing vegan population in Frome have somewhere they can come and have a much wider choice rather than one option on a menu.

So what are you waiting for , next time you are in Frome get on down to King Street and enjoy a delicious smoothie bowl or why not design your own pokē bowl, no 2 bowls are ever the same.